Hello all, and apologies for the lack of blog posts – it’s been a busy summer. I thought I would share my recent travel experience of Ghent, which is a really pretty city in Belgium. Having been to Bruges last year, I would say it’s similar in terms of architecture and having a pretty river running through it, but I think Ghent is a bit more lively as it’s a university city and there are some really cool and trendy places to go.

Luke and I travelled with a couple of our friends and we took the Eurotunnel to Calais so that we could buy some wine and duck (we love confit duck and it’s expensive to get in the UK, so we try to get it from France once a year and stock up). And BOY did we go for it. We got about 9 tins of confit duck – one of which will go to my mum and maybe a couple we will cook for family and friends, but at least 6 of those bad boys are all for us. And don’t even ask about the wine – we are stocked up until Christmas at least.

We stayed at the Ghent Marriott which was really nice – the back of it (or the front of it, not sure which) looks onto the river and the other side of it is a big modern glasshouse of sorts, it’s a very interesting building. Our room was nice and big, we had a king size bed which was lovely, and plenty of space. I think it was about £140 per night including parking, split between two of us so about £70 each. I would recommend it as it’s very central and the staff were really friendly. 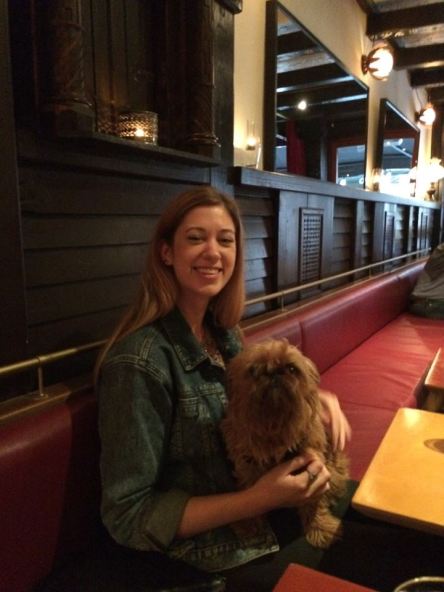 Our first stop after checking in to the hotel was to find a bar and a snack as our reservation was for 9:30pm – word of warning – it can be difficult to get a last-minute restaurant reservation in Belgium – we had the same problem last year when we visited Bruges. Although to be fair, there was some sort of classical music festival the weekend we were in Ghent, which would explain why it was so busy. So it’s wise to do a bit of research beforehand and book a restaurant in advance. We found a cute little bar, which typically I have forgotten the name of. It was quite atmospheric inside, quite dark with candles and some really good music playing – a bit of jazz and some other stuff, it was very chilled. I also had the pleasure of making a furry friend called Suzy, as shown in the pic on the right. She reminds me of one of those teddy bear people in Star Wars.

After that, we had a wonder around and then decided to go to the restaurant we’d booked called Pakhuis, our reservation was originally at 9:30pm but having had some Belgian beers (I was on the Chablis) we thought it best to line our stomachs! Luckily they found us a table fairly quickly. This place is really nice, it’s quite big and on a Saturday night it was really busy, but the staff were pretty efficient considering how many tables there were. Pakhuis is a former warehouse, re-purposed by Portuguese architect Pinto. It’s ‘a unique combination of a 600m² storage space with specially designed interior elements’ and I thought design-wise, it was awesome. The food was really good, with two and three-course set menus if you fancied something a little bit cheaper. I had a lovely Osso Bucco for my main and I was very jealous of my friend’s chocolate mousse trio – heavenly.

After dinner we headed to a well-known Ghent bar called ‘Dulle Griet’ which is quite cute with lots of those vintage drinks posters and infamous (slightly smaller than) yards of beer which you have to give one of your shoes for as a deposit. Luke and one of our friends had one of these each – they have a limit of one per person, very sensibly in my opinion as the house beer they use is really strong and a yard of that really does have an impact! After that we were ready to go back to our hotel and get a good night’s sleep. 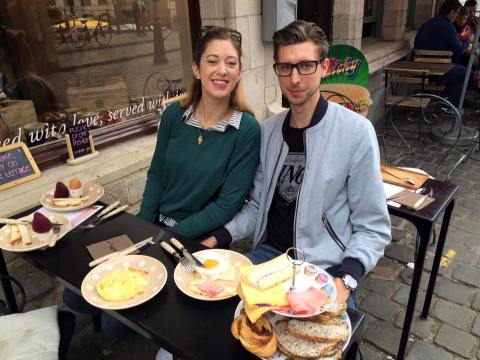 On our second (and last) day in Ghent, we had breakfast at an amazingly quaint little breakfast/bakery called Julie’s House. They had the most amazing selection of pies and cakes, and do lovely breakfasts with something for everyone. I’m not ashamed to say that I had ‘Julie’s Big Breakfast’ which included a cinnamon swirl bun; boiled egg with soldiers; french toast with cinnamon, brown sugar and some yummy apple sauce; and a pancake. AMAZING.

Then it was off to have a ‘Boot Trip’ (Boat Trip) up and down the river, which was only 7 euros and a really lovely way to see the city and hear about some of the history of it. The castle is beautiful, it looks like the typical fairytale, medieval castle. I just wish we had had time to go and see it, but alas, we had a Eurotunnel crossing to make and a stop-off at the Carrefour hypermarket in Bruges to get some Belgian beers (as seen in the top photo), yummy cheese and meats on our way home. All in all, a very speedy but lovely weekend spent in Ghent and I would definitely go back to explore more of the lovely bars, restaurants and shops that Ghent has to offer – as well as the castle (below bottom right).

A lovely picture of Ghent from the river 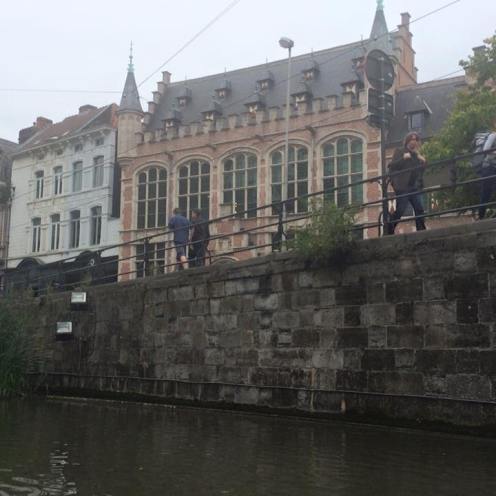